We have a mosquito problem. Four mornings ago, E woke up with a bunch of bites- a collection of three son his upper arm, three on his back, two on his forehead, one on his chin. The saddest. He always reacts to them so they look like welts. The bugger barely went after me, even though I have maybe 40% extra blood in circulation at the moment. The next night, he kept waking and whimpering ever couple of hours and I just thought he felt itchy, until I heard the unmistakable high-pitched whine buzzing my ear. I turned on the light, sat until I saw it, and killed it. Done.

Then the next night, the same. So I figured it wasn’t just an errant one that got in (I’ve lived here for a year and never had a mosquito in our room), and closed the windows and doors. Feeling like, “Aaah, now we’ll get a good night’s sleep,” we went to sleep last night and I was woken by another one in my ear. I killed FOUR. I went back to sleep and was just woken by another one. While I was trying to hit one way up high on the wall with a paperback children’s book, another one whizzed past. What’s going ON??? Are they growing in my water glass? Is there a hole in my window?? UGH.

But, it was almost 6am so I thought I’ll just roll with this and take a nap later. I can’t leave E in here as mosquito bait all by himself so I’m sitting next to him on the bed, writing on my laptop, and waiting for it to buzz my ear again so I can kill both mf-ers.

So, it’s been a while since I’ve been in here. My pregnancy sleep is expansive and consumes any productive me time like I used to have for meditation and writing. I do pretty routinely wake up at 3am and sometimes can pee and go back to sleep but most times I also have to eat cereal or yogurt, and then end up reading on my phone for an hour or more. I’ve considered making that time productive, but I’m really trying to stay in a twilight state of sleep and not fully wake up. So I don’t meal plan, clean, do yoga, or write. I pretty much read the news (which is also not restful). I’m really not sure how to get this time back, or maybe I just don’t for now, since my body wants to be in bed at 8pm and up around 7am, with a snack break in between… but I can keep experimenting.

The light is dim and a mourning dove is hoo hoo hooing. Baby is shifting around in my belly, happy she doesn’t yet live in the outside world of mosquitoes. E is scratching his forehead in his sleep. Despite my 2am snack of Grape Nuts, I’m hungry again and sleepy due to the 5:30am mosquito alarm.

In general, we’re doing great. I’ve been working with E on becoming more independent in preparation for being a helpful and somewhat self-sufficient big brother. I started with the morning routine, or, as he calls it, “The Whole Morning ‘Tine.” He has three things to do when he wakes up in the morning: get dressed, go potty, and eat breakfast, all of which he can do without my help. Each task completed gets a sticker on a big red chart we made, and 10 stickers = lollipop.

The first week went 100% perfectly. He felt proud. It still takes a lot of prodding to make the three tasks happen but he did them each morning before school. (It would be SO much faster to do everything for him, like 15 minutes vs. an hour.)

The second week pretty much fell apart because a) we started sleeping later, b) I had earlier than usual meetings, and c) the mosquitoes. I started doing everything for him in order to get out the door, the stickers trailed off, and he was reverting back to crying when I dropped him off at school. (I did coach him before dropoff yesterday that he’d be a brave boy and no more crying and you’ll have a fun day. He got positive and said, “Mom, today I’m going to kiss your cheek, kiss your belly, and give you a high five!” And he did.)

So now we have to regroup on the Whole Morning ‘Tine and also eventually work on evening. Last night, E overheard the NPR announcers talking about the hurricane and wanted to learn more about it. So, hoping that I wasn’t helping him develop a phobia, we watched a bunch of storm videos before bed. At 8pm, I turned it off and started moving him toward the bathroom. Evening ‘Tine is potty, brush teeth, wash face, put on jammies, read 3 books. It’s actually more steps than the morning. And he started screaming no and collapsing on the bathroom rug and I just didn’t have any more energy to coach him through it. So I said, “that’s it! no books! We’re going straight to bed!” and that’s how he ended up plopped into bed in his clothes with unbrushed teeth, unwashed face, and not having used the potty since school (but he’s a camel so don’t worry too much about that). He cried in the dark for a few minutes (I hoped that he was making connections about behaviors having consequences), and went to sleep ridiculously fast. Of course, a universal truth: the evening ‘Tine needs to start earlier.

I’m pretty sure this is how parenting will go: two steps forward, one step back. It’s so clear to me that this is a two-way street and many failures are because of me- I’m tired, I’m inconsistent, I’m annoyed, I didn’t plan well. But really, it’s mostly him! Which makes sense as he learns to navigate new feelings of independent and proud vs. rebellious and resistant- frankly, all good qualities to nurture in a person.

I really haven’t read any parenting books, just get a sense of different methodologies from articles other moms post on Facebook mom groups. I don’t see myself doling out punishments, although I do see myself enforcing natural consequences of behavior (yes, there is a fine line)- e.g. you don’t cooperate with the Evening ‘Tine, you don’t get books before bedtime. I also don’t want to push food on him. I’ve found myself hounding him about taking X bites and dangling dessert as a reward- then I just read an article about putting the food in front of them and not pushing anything. “You don’t have to eat that.” It’s like the potty- if I push, he resists, end of story. But he goes when he has to. I feel sympathetic because while pregnant, there sometimes foods I don’t feel like eating; even ones I put on my plate. It’s an icky feeling that someone would force you or coerce you into eating what you don’t feel like putting in your mouth. I get that. (Plus he does really well most of the time. He will shovel homemade kale chips into his mouth. Even if I’m pretty sure he would live on crackers and cheese if given the option.)

I feel good- honestly, just hungry and tired. All appointments and tests so far say things are progressing normally. The baby moves a lot, with little bumps turning into longer swooshes as she gets bigger. I obsess over her name, just like I did with E, and I sense that, like with him, I’ll have to see her first. I sense she will not be a girly girl, or is that just my idea of her because I know she’ll have a big bro and wear his hand-me-downs?

She instantly stops moving when anyone puts a hand on my belly to feel her kick (also universal?). I feel big for 24 weeks and as soon as I’m done writing this post I’m going to go back to my 24 week belly shot from my last pregnancy to see how the belly compares. I swear the maternity shirts aren’t even covering the roundness all the way, and I still have almost 4 months to go…

And I feel super out of shape. I walked downtown with E on his glider bike, about 5 blocks one way, to meet my sister’s family for Thursday Night Out (a little weekly summer street fair with food). By the time we got home, my body felt so creaky and imbalanced and sore. I remember the many-mile hikes of last pregnancy… which hasn’t been happening. My plan is to re-join the gym, as soon as they re-open from doing renovations, with the intention of swimming a few times a week. I want to be sure I’m going into the birth strong, like I felt last time.

Now I’m starving and need to shower before my sleeper awakes. Have a wonderful weekend! We are heading to the zoo. xo 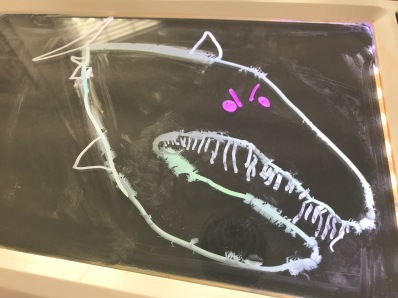 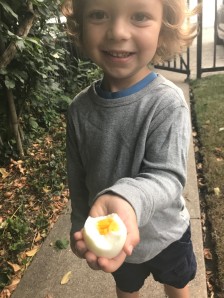