So I went to UCSF last week to get my uterus checked out. It’s the saline sonogram and test transfer where they blow up your uterus (slightly) with a balloon to make sure that everything looks good. I’m getting all the tests and appointments out of the way now even though I haven’t yet devised a weaning plan and hombre is still nursing a lot.

When I made the appointment, they told me to take 800 mg of ibuprofen an hour before (I honestly don’t know why since it wasn’t painful either time), and a pregnancy test. I was supposed to tell them the date of the negative test.

Now, I’ve taken enough negative pregnancy tests in my life that I’d rather not take one just for fun. I told the nurse on the phone that there was no way I was pregnant, like no way, and she kind of stumbled but said OK, just let them know.

I forgot about it. I don’t stress about these situations- mostly I want to keep the other person from getting terribly uncomfortable. I am comfortable by now with doing this on my own.

A nurse with an accent, maybe Russian, came to get me from the waiting room. I was getting settled in the exam room when she asked me about the pregnancy test. I said, perhaps a bit emphatically to reassure her of the impossibility that I could be pregnant, “Oh no- there is zero chance I am pregnant. I haven’t had sex in A REALLY LONG TIME.”

She blinked and I knew I had given way more information than she needed. She said, “Oh, OK, you’re not here for fertility reasons but to check your fibroids?” She looked relieved like she had figured it out.

No, I’m here for fertility reasons.

Oh, OK- now she was legitimately flustered and flew out of the room. I made a mental note that I don’t need to alienate people with so much information and resolved to dial it back.

The doctor then came in with another doctor visiting from Switzerland, and a different nurse. They were friendly and chatty and we talked about the gorgeous new building with the stunning views of the bay.

The main doc asked me about the pregnancy test. This is when it would have been totally fine to say, “Yes, it was negative.” Or even “I date women.” But I’m weirdly unable to lie even when it’s helpful and innocuous. So I said, “No, but there is zero chance I’m pregnant.” Which only left them to pry a bit and remind me that sometimes bleeding can be misconstrued as a period when its actually not, which is why they require the pregnancy test. And I was thinking- here I am laying the groundwork to get pregnant, so if there actually was a chance that I was, and that the pregnancy would be endangered by this saline sonogram, YES I would take a test. Of course. I wanted them to know I wasn’t ignorant.

So I opened my mouth and the whole story came tumbling out about doing this on my own etc. That’s how I roll. (You know that, because you read my blog.)

So they got it and moved on and the Swiss lady asked if I had weekend plans and I said YES, my son’s second birthday party! And then I had to explain that he was also conceived and born at UCSF and etc etc etc.

So, I guess that’s me being discreet or low-impact with people who don’t expect a solo mom… The whole story comes flying out. It’s about putting them at ease by showing that I’m at ease. The Swiss Doctor wished me luck.

I rarely get asked about E’s dad but I did get asked last week by an IT guy I’ve known for many years- he was sitting at my desk working on my computer while I stood next to him. He said something like, “I see pictures of the baby but none of the dad!” Gesturing around smiling, implying that the dad was sorely underrepresented. The right answer was something like, “Oh, that guy? Yeah, it’s all about the baby now.” But instead what came out of my mouth was, “Oh, that’s because he doesn’t have a dad.” Which is what I think we all agreed is NOT what I was intending to say- I wanted to say, “Our family doesn’t have a dad” but I did go on to explain that I chose to have a baby on my own. Maybe the answer was, “That’s because I had him on my own.” He said that was brave, and then he got quiet. I felt like the whole office was listening. Live and learn.

It doesn’t have to be awkward, but I suppose it is because people innocently stumble into a very personal conversation. One thing I’ll never do is pretend he has a dad for the sake of making people more comfortable. With the exception of someone passing by in the airport who asks his age and then says, “His dad must be tall!” No point chasing them down to set them straight.

E himself is starting to try to make sense of who has a daddy and a papa. We had a conversation in the car yesterday that went well. He was saying Papa and I said who do we know who has a Papa? He listed some friends. Our family doesn’t have a Papa. Who do we have? He said Mommy. And I added Mimi, Chacha, his aunts, his uncles (S and J!), and his cousins. He repeated all these back with a smile. He’s totally satisfied with that. I know that, for a while yet, the awkward one in that conversation is me.

We have a book called Love is a Family which I super loved until I realized it doesn’t include gay families! I only realized it after I recommended it to a two mom family. Ugh! The point is that there are single moms and dads, step parents, adopted kids. But no two dads or two moms… Disappointing. I’ll search for more truly inclusive books.

Still, the message is good: love is a family. Love is all you need. 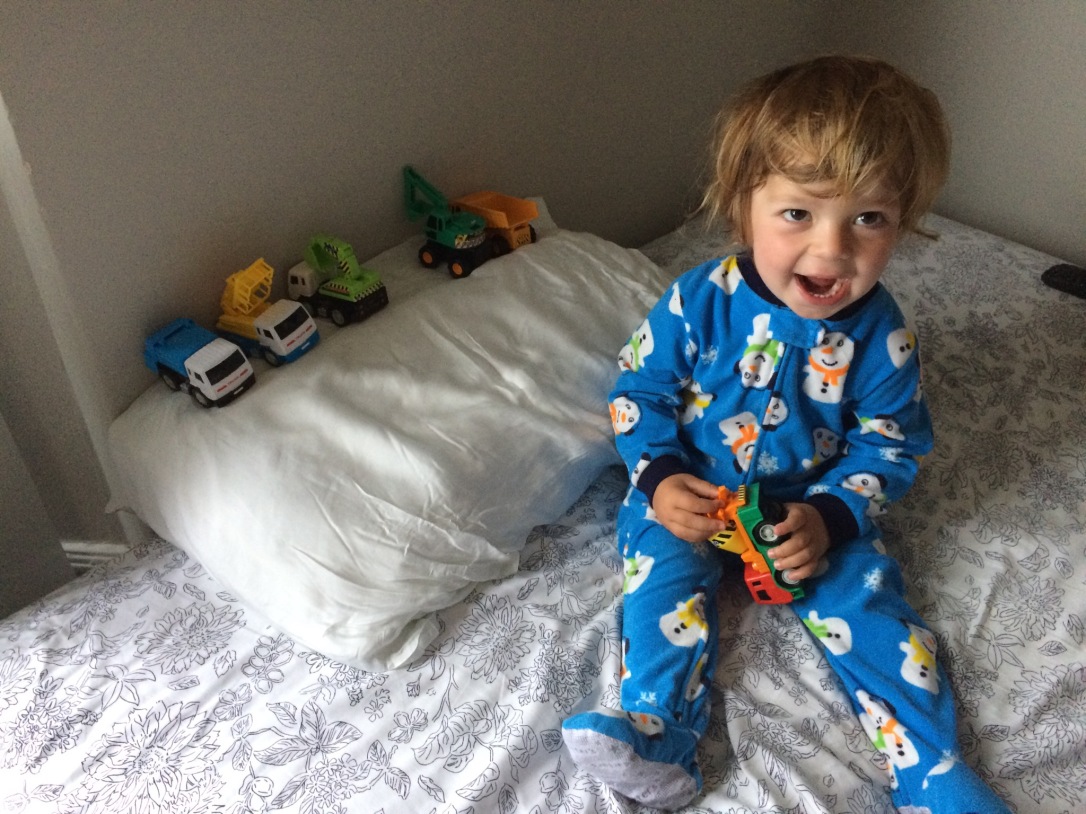 Ever since yesterday morning, the day before E’s birthday, I’ve been tracking the hours of labor. A long day at work was only 1/3 of the total labor time. I got home and had dinner and though, wow. I was just getting into the thick of it. Last night, E was kind of agitated, waking up more than usual. It felt like an echo of the night before he was born, reminding me of how much time 28 hours really is.

And then, this morning, the light. When daylight started creeping over the horizon that day, I finally had the urge to push, and the sun rose with my triumphant pushing that baby out with every ounce of strength I had. And I recognized that light, being in the same city at the same time, only two years later, I had a muscle memory for how that day felt, and I felt it again.

E woke up giggling. He definitely doesn’t understand birthdays but does know the song and sings it for anyone or anything he likes. One time a cashier gave him stickers and the whole way home he was singing, “Happy birthday, Target!”

I let him know it was his day and he understood in the way toddlers understand things, which is to say deeply but not logically. He got blueberry pancakes on a Thursday. He got to watch “Baby Shark Doo Doo Doo” while I took a shower. He said, “No school, Mommy. Playground.”

But, yes, we have to go to school! I made two gluten-free, nut-free zucchini breads and you need to celebrate with your friends.

Driving to school, I looked up at UCSF on Mount Zion, visible from all the neighborhoods around it. The light. The day. We were within an hour of his birth time. I glanced back at this long boy sitting in his forward-facing car seat and remembered that new, never exactly little but much littler, baby. And that incredible joyful high.

I dropped him at school and the director suggested I stay to sing happy birthday and do candles right then. E sat framed by lots of kids sitting obediently and watching the festivities. He wore a party hat and looked very serious. P lit the candles on the zucchini bread and we sang Feliz cumpleaños and I encouraged E to blow out the candles, which he didn’t (so I did). Then each kid gave him a hug. He was concentrating hard, trying to figure out what was happening, and probably mostly puzzled about why I was still there.

It was his birth time. I was crying. P hugged me twice and said she understood. I said- I just didn’t realize how much the moms feel it!

And all day today I felt it.

At the end of the day, the teachers gave me an art project that all the kids made for E today- their colorful handprints, each with a name next to it. In the middle, it says “Feliz cumpleaños, E” and the teachers signed “con amor.”

Then we went to the windy playground, since that was his wish. With burritos. Then we facetimed with family and ate ice cream on the kitchen floor.

As he fell asleep tonight, I thought about our first night together after his birth, in a little room looking out at a forest of beautiful trees. I had no idea that a little creature could keep you up so much of the night. I didn’t think there would be so much nursing before the milk came in. I thought the bassinet was there to hold the baby but he was having none of that. And the hospital bed didn’t feel safe for cosleeping. So I found myself laying awkwardly at the foot of the bed with him perched, sleeping, on my chest. The doctor came in at some point to check me, and I thought she would reprimand me. She gasped and said I looked like a birth goddess.

They kept asking me if I had any pain, and I kept saying, “No, I’m just so happy!” Like the kind of happy that makes you forget your pain.

And life flows on. What a gift. So many wishes for his life and gratitude for all that we have.