Wow, it’s 7:39pm on a Wednesday and I’m WRITING AT MY DINING ROOM TABLE! This hasn’t happened in… years?

For months now, I’ve gone to bed with E around 8 or 8:30. I was always a night person but you adjust, like adjusting to a new time zone. When we are reading the second book of three, I let out a huge yawn, and by the time we turn off the light, we’re both out.

The snack sesh usually takes place around 3am but could really happen anytime between midnight and 4am or so. I’d get a snack (usually a yogurt or cereal or both) and settle in to read stuff on my phone. It felt almost rebellious because I would inevitably get immersed in the internet and an hour would go by. I realized that it was my only me time, so why fight it? I’d go right back to sleep and still get 9-10 hours total.

Still, I was kind of beating myself up about the aimlessness of it. I’d surf around on facebook, letting other people curate my reading list. I’d respond to personal emails that got buried in the 50-60 emails from a zillion random mailing lists that arrive each day. I’d read everything in my Twitter feed from the past 24 hours. My rationale was that I needed this me time and I didn’t want to do something “productive” that would “wake me up more.”

Then, my sister D asked me to edit a book she wrote. I really wanted to do it, and I realized that the snack sesh time slot was my only hope. I wanted to get it done in a week, which meant working every night for two hours. Could I do it?

It’s still weird to me that I achieved this, but I’d wake up every night somewhere between 12-4am, do a five-minute check of the internet, and then work for two hours. I finished it in a week. I was totally able to focus. Some times were easier than others to go back to sleep, but I wasn’t sleep-deprived, and I was feeling gratified that I accomplished something.

Once I was done, I thought- awesome. I’ve carved out this time, now I can do a personal project. I have so many in mid-stream. The first night, I celebrated by going back to reading stuff on the internet. Then I moved on to baby name research (because I have to evaluate every name in existence and then meet the baby before I can choose a name). I also want to make a list of projects for when my parents come, like painting the dresser/changing table, washing baby clothes, and ridding my place of clutter. But I was dragging my feet about blogging or picking up my book-writing which was abandoned months ago at the end of Chapter 3.

This morning, E was a little lethargic. He was a little warm. Then he told me his legs were tired and his bones hurt. Sigh… He was sick. So he spent the day watching Moana and Paw Patrol and I spent the day missing cues on conference calls and trying to get him to nap. I pretended it was bedtime at 6:30pm and he went to sleep. I laid beside him dreaming of all I would do with my evening. Watch a show? Continue name research? Pick up book writing? Eat an ice cream bar?

I never would have believed how impossible it is to get time for oneself as a parent. I remember people telling me you don’t even have a chance to shower or take a shit. And I, like many people before they have kids, thought it would be different for me. Because how hard is it to problem-solve that? But what you forget is that you’ll be simultaneously problem-solving dinner, monitoring your kid who is climbing on the furniture like a jungle gym, checking a text that came in from a work colleague, and planning A-Z for tomorrow. And, obviously, there’s more to juggle when you’re single, and less time and energy to juggle it when you’re pregnant.

But I/we HAVE to get that time. Editing my sister’s book felt like a tropical vacation. On the days when I manage to meditate for ten minutes, I give myself a literal pat on the back. I listen to audio books on my way to pick up E from school. I schedule a lap swim in the middle of the work day. I call a long-distance friend when I have five to seven minutes to talk.

And now I’ll add a newborn to the mix!

Cheers to an evening with me.

(Here are two photos that mysteriously showed up on my phone.) 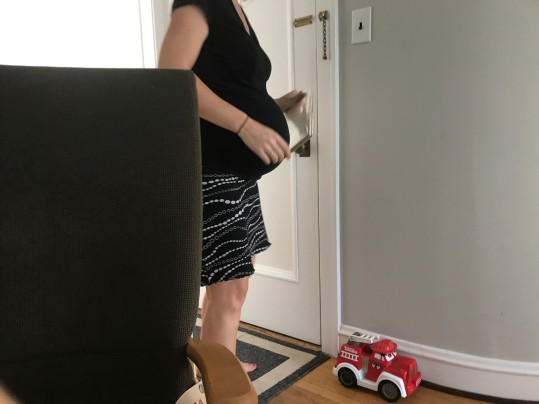 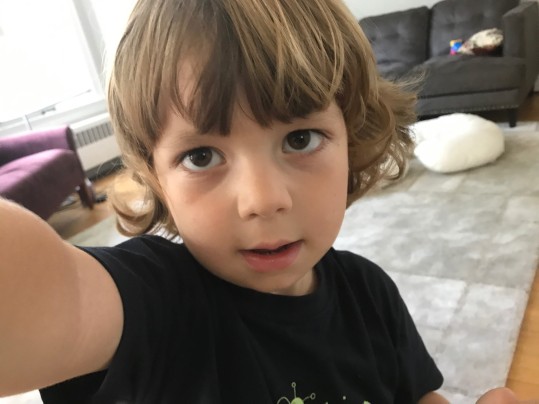