Hi!!! Wow. It’s been too long. A lot has happened and now I have a slightly longer bus ride which means I can furiously tap on my little iPhone keyboard and get a little update out to you.

The biggest news is that I ended our nanny share and started E at a little Spanish immersion preschool. When I dropped him off this morning, it was the first time that it felt a little bit normal. It’s been weeks of transition!

The first thing that happened was that the other mom of our nanny share crossed the line. We had never gotten along easily but we loved the nanny and the boys got along great. She could be selfish and inconsiderate, not to mention unreasonable about germs (e.g. she thinks she can control them) but when I weighed the pros and cons there were more pros.

Then one day she decided that E had gotten her boys sick and took all of them to a doctor (with the nanny) so the doctor would back up this theory. Without my permission or knowledge! On what planet is that OK?! Then she sent an accusatory text saying (and I quote): “Your son gave my boys RSV” to which I responded with a phone call and then we were in a screaming match. Her worldview is that my child is “constantly sick” and gives her kids all his germs (never the other way around) and that there must be precautions I’m not taking. I disagree with all of the above. I also think it’s good for kids to be sick and that this is part of nature’s design as they develop their immune systems, so I’m not in the habit of quarantining him or chasing after him with hand sanitizer.

She claimed that the doctor didn’t actually evaluate him, just happened to hear his cough, and they all went because they were on their way to the park (?) but it was beyond sketchy to me. I realized that although I totally trusted the nanny, I no longer trusted the other mom.

So, as quickly as I could, I circled back on some options that I had investigated last fall, and thank goodness there was an opening at this school (in a city full of waiting lists!). I had an in-person cry with the nanny when I told her the news, and ended things with the other mom via text (she wouldn’t call me back), and we were free. I post all of this publicly, because there’s nothing here that I’m afraid for her or anyone to see, and I think people should be aware of the pitfalls of nanny shares. I wish her well although there are few people who have made me that angry. Mostly I hope that her boy does OK once he starts preschool and gets every germ under the sun, poor kiddo.

The relief of being out of the share was barely beginning before I realized the giant transition we were facing. Up until this point, the nanny had picked E up from our place and then I got ready for work. What luxury! Now I need to get us out the door together and into the car.

Plus, a giant adjustment for E. Thank goodness (again!) that my parents arrived precisely as all of this went down and we could adjust E gradually. I brought him two 1.5 hour days, three 3-hour days, then 4 full days. Many tears upon drop off (and briefly again at pickup) but today he was calm and only cried the moment I left. Progress.

The director is wonderful and debriefs me at the end of each day, often emailing with me in the evening as well. E has bonded with her and she already loves him. He’s starting to integrate with the other kids! She sent a video this afternoon that showed him sitting in a circle for story time and listening like a good little student!

The relief is starting to be real, after weeks of stress and uncertainty (and business trips). I’m really happy and getting used to our new routine. Magically, the new school is on the outer edge of the city, so there is no limit on street parking- I can leave my car all day while taking this bus across the peninsula to my office. It works.

While it’s heartbreaking to leave a crying kid at a new school, I swear that I’ve already seen him expand in terms of confidence, intelligence, and charm. We had the band over for dinner last week and he greeted each one as they arrived, mastering their names, sitting on their laps to read books, showing off his “chicken” (kitchen). He was such an extrovert! After a day at school.

I love this guy so much. 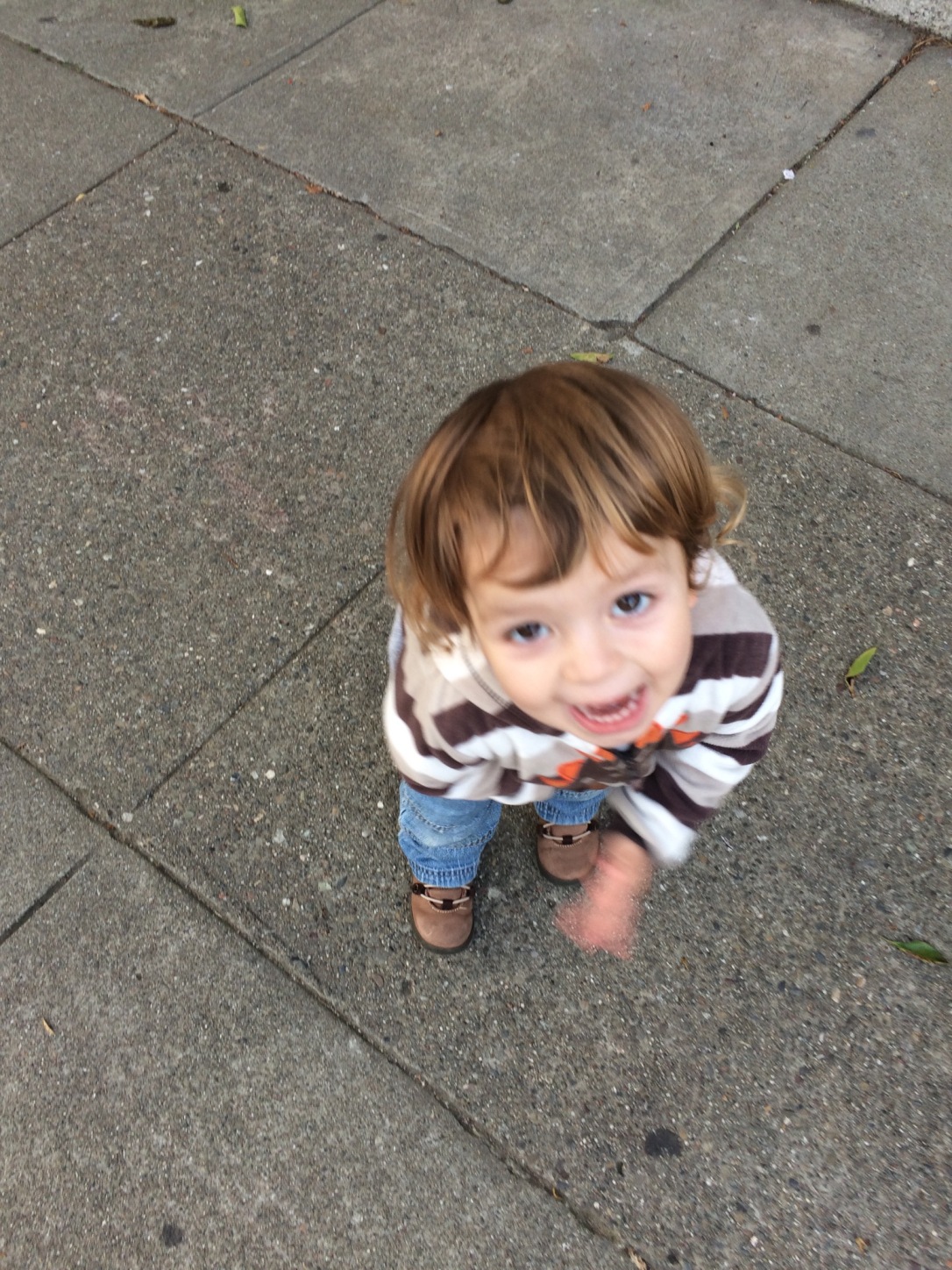 My nursing top is up!! If you haven’t already, and you have 30 free seconds, please please vote for the Gotcha Covered Nursing Tank!

Designed in collaboration with my amazing clothing designer friend L! I can’t believe how great it turned out. I can’t wait until they make it and it sells a bazillion units and I can retire early. It’s a very quick and simple registration to vote. If we get enough votes, they will make a prototype for presale. Thanks a million for supporting my idea. (And therefore supporting nursing or future nursing moms everywhere)

Oh my goodness, I have so much to tell you. E is in a new school! More soon Xoxoxo