OK, that was a bit of a hiatus now that I’m on vacation–needed a break from the computer. At this moment, I am on the balcony of my parents’ place in northern MI and, even as we speak, I’m being summoned to paddleboard with my dad or take my niece to the beach, so much to do up here at the peak of summertime. But I’m taking a little time to write. I’m looking out at a placid Lake Michigan, one solo obnoxious boat breaking up the peaceful morning and buzzing around like a mosquito, a hazy sky and golden morning sunlight from behind me. A cool breeze. I dream of this balcony when I’m away.

Picking up where my last post left off. The evening of my IUI, I went over to the East Bay to have dinner with my friend C. Four years ago, we met on a Yosemite trip as part of a big hiking group, and I learned that this was her “last hurrah” before starting to try to get pregnant on her own. Although this was four years ago, I was already starting to have inklings that I may not find the right babydaddy in time, as I was then dating a guy not that seriously because I knew he didn’t want kids. At a party a month after the trip, I got a bigger download from C on the experience–she had gone through one round of trying and had just found out it didn’t work. She told me all about the national organization Single Mothers by Choice, the actual nitty-gritty process of getting oneself knocked up, and the onslaught of emotions following one failed attempt. I was fascinated and taking mental notes.

After that party, C’s journey suddenly went in a wildly different direction when she started dating the guy whose party it was, and after a few months they decided to get pregnant together. And they did get pregnant (on the first try), and had a baby girl. We fell out of touch after a little while.

About a month ago, I felt compelled to reach out to her to let her know what a big influence her experience had on me. Once I was ready to become an SMC last fall, I knew exactly where to go. She wrote back to tell me that my timing was coincidental as she and her baby’s father had just decided to separate (super amicably and gradually) and she was preparing to be a single mom after all. We started making plans to get together–lots to catch up.

Mere hours after my IUI last week, I headed over to the East Bay, and was greeted at the door by pretty little two-and-a-half-year-old S, who promptly looked up at me with wonder and said in two-year-old-speak, “You’re an angel!” I blinked and asked her to repeat that, and she said, “You’re an ANGEL!” Then she insisted that I take off my boots and join her on the couch for some jumping. According to her parents, this was not her usual drill with new friends, and I was honored.

Of course, I took this to be a cosmic sign. It was wonderful to catch up with C, to hear her whole story of pregnancy and birth and her overwhelming love for her girl. She offered to be a resource and support and I am excited to be back in touch.

The next two days I spent frantically preparing for the trip (mostly wrapping up work), got up at the crack of dawn on Sunday to fly 4.5 hours to Detroit then drive 5 hours up here. I’ve spent much of the past two days sleeping–sleeping in, naps, other naps. Decompressing. You just don’t know how much compression is in there until you let it out.

The big highlights here are my nieces, who are both nonstop cute and fun and fascinating: E is turning 4 and S is 9 months. E has taken to calling me “KK” (I’ve graduated from “Tata Hot,” which she called me as a baby), and her grandpa is now “Chatmo,” for reasons only she understands. S will look up at you and bestow a smile that is like the sun bursting out from behind the clouds. They are a blessing. Of course, it’s wonderful to be with my parents and sister and bro-in-law too. 🙂

Yesterday, I went running on the new Sleeping Bear Heritage Trail that recently opened up and is a big deal around here. It goes from Glen Arbor through the National Lakeshore land to Glen Haven and all the way to the Dune Climb. Chatmo was my SAG Team (Supplies and Gear) with water and snacks in his pack. I did 8 miles at a mellow pace, and we sailed along through the old-growth trees in the leafy shade and at one point a big deer bounded in front of us on the trail. She stopped and looked behind her and then took off again, followed by a dramatically prancing fawn.

I am 7dpo (days past ovulation) and calmly transitioning into the final week of the wait. I feel calm, surrounded by support (including my parents’ downstairs neighbors the W’s, my cheerleading squad), and that it’s just a matter of time. 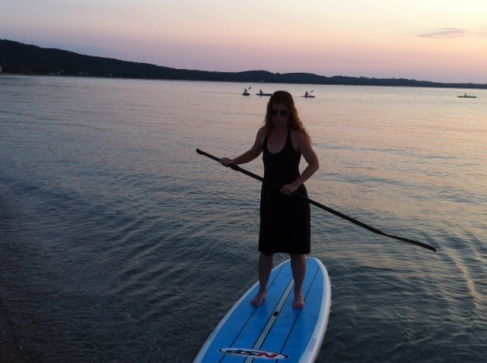