Great news: we are communicating! Baby E started waving (sometimes it looks like more of a knee slap)–he waves at his reflection, at strangers, at loved ones. He waves when you wave to him. As we deplaned yesterday, he waved at everyone waiting behind us. It’s amazing to see such a small little brand-new person conveying his greetings.

He will also dance on command. The command is, “dancey dancey.” He’ll start bouncing his knees in an irregular way, with a big open-mouthed smile. This is our first evidence that he’s understanding language. When my mom first told me about it, I actually didn’t believe her. But today I tested it out of the blue, and he started dancing.

So, now that we’ve broken the ice, I’m thinking about all the other things I could teach him. Like, “please don’t bite my nipple.”

I’m seeing glimpses of an emerging personality. He’s outgoing. He might put his face in my shoulder for a second when he meets someone new, but after that he’ll slowly reach out his index finger until it’s on the person’s nose. When he is faced with something a little too scary (like someone who talks too loudly), his bottom lip will quiver and his eyes will fill with tears, but he will try to handle it rather than cry. He’s stoic. When he got a flu booster in his shoulder a few weeks ago, he gave a small protest whimper and that was that.

He really wants to crawl but so far is doing the ‘army’ crawl and/or scooting accidentally backward. He hasn’t figured out how to coordinate his legs to move forward and ends up in a plank or downward facing dog. Each time, I think, “Oh jeez. I can’t even do a plank right now.” This guy is strong.

I took him in a pool the other day, and I let him grab the side. He basically did a pull-up a foot above the water–I could have let go (I didn’t). He loves the water–big smiles and kicks and splashes. I just got us signed up for a swimming class.

He’s finally eating food! Although tonight’s sweet potato was mostly rejected, last night’s burrito offered bites of rice and beans which were met with arms-in-the-air excitement. That’s how I feel about burritos too!

I’ve gotten to know the after-hours nurse line more intimately in recent weeks. First, he stuck his finger in a hot pancake and got a big burn blister between the nail and knuckle. His hand was just too quick and the pancake was too molten. I felt horrible. Other than the moment it happened, it didn’t seem to bother him too much. Now it’s all healed (thank God it wasn’t more serious).

He also came down with croup right after Christmas. He got sick really fast and had this yucky-sounding cough. I took him to the pediatrician a block away and he heard the distinctive croup cough (think barking seal). He got steroids for two days and some fresh air. He recovered pretty quickly although we didn’t even realize how sick he was until he got better and returned to his squealing, jabbering, bouncing self.

As this personality emerges, I feel more and more like someone is here with me–less of that pure baby energy and more of this specific little boy.

A little boy who chooses to pee precisely when I take the diaper off, somewhere around 60% of the time right now! No joke!

One of E’s name meanings is “God is gracious,” which is as close as you can get to “gratitude.” 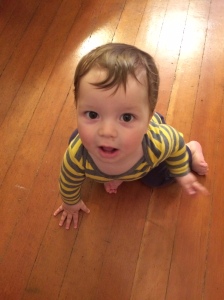 2 thoughts on “this boy”