Last time J was here visiting, we went over to help my sister pack as she prepared to move in with her girlfriend. As he gleefully packed her kitchen in the space of just 1.5 hours, I realized that of course I would need his help with my move as well. This is a guy who is masterful with anything related to order, symmetry, spatial relations, and general meticulous organization. I bought him a ticket from New Orleans to SF with miles and he arrived Monday.

One thing I’ve noticed since deciding to make this big move is how I’m missing having a partner for the first real and deep way since E was born. There are many things about having a partner that I have kind of been surprised about not missing or craving–but when it came to making all these big decisions, I miss having someone to talk them through with. Someone who was equally invested and able to process with me on a daily basis. I specifically am missing that as I’m processing the emotions of all of it.

I’ve leaned heavily on family and friends in recent weeks as I work through all these decisions, and everyone has been incredibly helpful. And- I don’t want to speak too soon, but this move feels like we’re seriously dialed in to the flow of the universe.

But back to my couch- everyone has a different opinion. I bought it 12 years ago, which of course seems like last weekend to me. I bought it new, which means I spent a lot, and bought it right in the showroom, for full price, and so clearly on some level I believe that I must keep it for the rest of my life. It’s literally the only piece of furniture I’ve bought new outside of Ikea. But, beyond that, it’s just been a comfy and constant presence in all my places since then. It’s light yellow with messy pillows and outstretched armrests that want to give you a hug. It’s huge- people can easily stretch out and sleep on it. I thought I should bring it. My whole family said an emphatic no. J said, absolutely no. (My sister D said to bring it but she hasn’t seen it in a couple years.) I asked J, “What do you have against my couch?” J does not mince words, “It’s dirty.” I looked it over and he’s right. It’s kind of dirty, and old, and slightly worn. And a huge thing to move. I went to Craig’s List and realized that all the free couches pretty much look like mine.

So, I’m giving it away free. If I am so lucky! J has his doubts. And this is just one of so many decisions.

I could not ask for a better friend, brother, and decision partner than J. He’s close with his older sister who is also a single mom- so he knows how to step in and be monumentally helpful. And he loves to help, loves to be efficient, loves to check things off the list. He BARTed in from the airport and I met him in the Mission where we bought boxes, caught an Uber, and picked up E. Each day last week, we went to work (we work together), came home, made or ordered dinner, then he cleaned up and started packing while I got E to bed. Yesterday afternoon, we finished up work, got my car washed, bought more boxes, installed a new windshield wiper, and picked up some groceries before getting E. Today, I had E with his former nanny almost all day and we both worked hard for six straight hours and basically got it done.

At several moments, I caught J whispering, “Damn, I’m good,” as he perfectly laid the final object into a box like the last piece of a puzzle. He used rugs to wrap fragile mirrors, he was giddy when he found leftover plastic bags with zippers that perfectly held the right combo of stuff, and he was distraught when we realized that my iPad had been missing for several days and likely got put into one of the boxes by mistake. (He called my phone while I turned on my dog hearing and went box to box until I heard it, ringing nestled in a box of books.) The guy takes the whole thing really seriously, and at several points during the week had a crisis of confidence that we would never get the whole job done before he had to go. He was way more stressed than me. (In part because it was really all I could do to get through our regular daily routine and I kept barely helping and going to bed early.) His brain simply works differently than mine in this respect and I’m so lucky that I could even dream of summoning that kind of help.

As I write this, an email just came in from someone interested in my free couch, and she has a truck, and she can pick it up tomorrow. My heart just started pounding. I’m having a bit of a hard time letting this one go as I’m in blogging mode with my back against one of the outstretched armrests, this couch has been my friend. I almost cried when a fellow single mom picked up E’s kitchen today…

E is not missing a beat. I wondered if he’d start noticing stuff was gone, like his kitchen, but we seem to have left out just enough toys, just enough books, and just the RIGHT toys and books (so far, the ones he’s asked for have all been the not-packed ones). Other than vying a bit for my attention while J was here, he’s just himself. He thinks a little more about Chicago, and his cousins, due to my prompting (he wants to go to the train restaurant). He just started saying “OK” as much as the rest of us. He refers to any semi-obscured space like under the couch as “behind the jungle.” He has such a great sense of humor. We quickly develop series of inside jokes like, “It’s a what?” “It’s a boing boing.” “It’s a what?” “It’s a what?”  “It’s a boing boing.” “It’s a hippopotamus?” “No, it’s a boing boing!” Then it doesn’t come up again for five days, and out of the blue he goes, “It’s a what?”

I really do think I’m calmer about the “where” because my “why” is coming with me.

We have something like 42 boxes packed, movers booked, plane ticket bought. We left out a few dishes, pots and pans, utensils. The amount of toiletries and clothes that you’d have on a 2-week trip. A few odds and ends. Probably the amount of possessions that Marie Kondo would say is optimal. No rugs, nothing on the walls. It’s so freeing to be so uncluttered (and, ultimately, this is probably the most organized I’ve ever been in my life).

Tonight, J, E, and I bundled up and headed out for pizza into the thick fog, E on his trike. It was such a normal night in SF, and yet everything is about to change, and yet not really.

Tomorrow my couch goes. And E and I will enjoy these last ten days in a way that I’ve never been able to enjoy such a big transition. 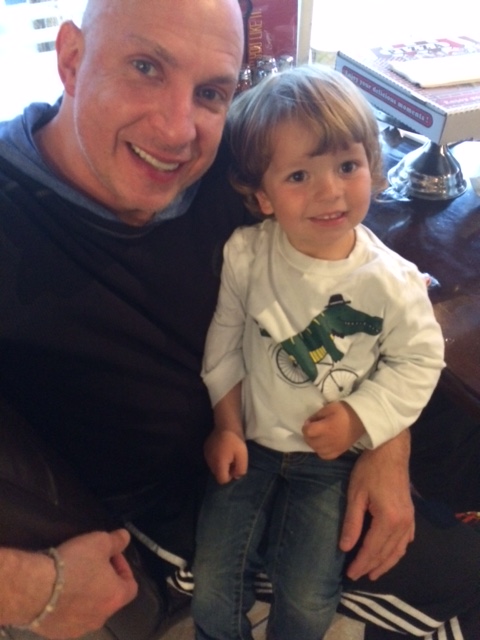