I recently identified the gremlin that says, “If I take time for me, all the other stuff won’t get done.” I’m calling BS. I just got E down for a nap. The kitchen is a mess. I have a giant bag full of farmers market goodies waiting to be put away. Toys everywhere, vacuuming needed, the bathroom really needs a clean. Big work deadlines next week. And so, I quite consciously sat down to write. I may even meditate after this. And what needs to get done will get done.

Because, really, it’s never done, right?! So what difference does it really make if I take time for me first? Me First. New slogan? Oxygen mask, etc.?

We’re having the kind of cosmically idyllic weekend I fantasized about before moving here. My sister picked E up early from school yesterday to play with his cousins at their place. Then we all sat around my big farm table with all three kiddos on the bench and had lasagna. My nieces stayed overnight because my sister and bro-in-law both had early morning stuff to do (note that D is going door to door for Hillary in Iowa as we speak, YAY!), we had a big scrumptious breakfast of blueberry pancakes and egg scramble, went to the playground, and then the girls went home while E and I went to the last farmers market of the season, meeting up with dear college friend K who was working a bake sale fundraiser for her chorale.

It’s overcast and weirdly 77 degrees today. Aside from this anomalous weather, it’s been getting pretty darn crisp in the morning and evening hours. E was sick this week so I got him a nanny and worked from the library. Stepping outside at 5pm to come home, it was cold enough to want mittens. Maybe 45 degrees. What struck me was the smell. I had forgotten the smell of the slow decomposition of leaves and it triggered memories from my childhood. Those memories get called up much more often here since this place is so much like the place I grew up. I knew we were returning “home”-ish but I didn’t anticipate all the visceral reminders. I like them. We’re home.

And now it’s already Halloween. It’s the unofficial main city holiday of San Francisco, so I’ve had my share of big and small celebrations over the years, always put my costume together the day-of, and was really distanced from the kiddo perspective. Living in apartments all this time, there was never an opportunity to hand out candy or see kids in costumes. E was too little in his first two years to do anything much so it didn’t really matter… we did some little Halloween parties. But now we’re here, where every other house is decorated with lights and cobwebs and gravestones and ghosts, just as E is coming into consciousness about what it’s all about.

Ask him what he’s going to be for Halloween and he’ll lean in, bug his eyes, and say, in a quiet and intense voice, “I’m gonna be a FIRE TRUCK.” I knew I could not disappoint.

So, I found a DIY “recipe” from a Pinterest-y mom who randomly had all the perfect stuff, you know, just laying around the house to make a fire truck costume. For me, it required two trips to Michael’s to the tune of probably $50. So silly. I now have red and black spray paint (as well as gray primer), yellow and silver duct tape, black ribbon, and a glue gun. A glue gun! These things were never my forte. I’m the least crafty person I know. I think I did realize, though, that you don’t have to necessarily be talented- if you can find a “recipe,” it’s really like cooking: you just follow directions. I did veer off the recommendations and try spray painting styrofoam- and that resulted in disintegrated styrofoam! Good to know. Cardboard was better anyway.

You guys. His firetruck costume is totally amazing. It took probably 2 full evenings and several mid-day painting sessions. My work was fueled by love. I’ll unveil the magic for him perhaps Sunday night, or Monday morning. He has a Halloween parade at school (I will be there between meetings) and will trick or treat with his cousins. We will obviously take many photos with the cutie in costume but here it is without him: 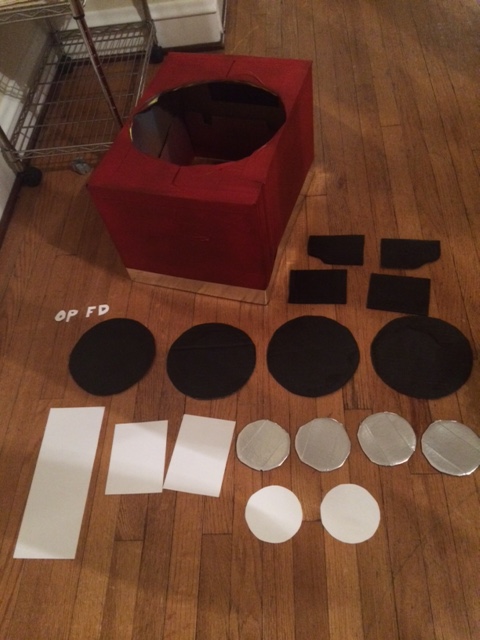 We’re carving our pumpkin later this afternoon and we have cider and pumpkin pie and, yeah, I’m getting into all of this!

Last night at bedtime, the girls requested a story from my childhood. So I told them about Halloween- the homemade costumes (I don’t recall anyone buying a costume, ever), how they were inevitably covered up by coats and hats and mittens because it would be snowing sideways or cold rain or some other unwelcome weather, and how we trick or treated after dark. Memories reactivated. And relived.

Grateful to be here for all of the above. Happy Halloween!

1 thought on “I’m gonna be a FIRE TRUCK”