I’m up early. We’re having a warm thunderstorms- not exactly your typical weather for Chicago in February. When I moved here last summer, people couldn’t wait to tell me that we were due for an epic winter- massive snow, subzero temperatures. The people were wrong and we haven’t had real snow since December!

Inside the house, we’re in a weather pattern that is not at all going the way I expected either.

For months now, I’ve asked E if he wanted to sit on the potty. The prevailing mom wisdom was: “Don’t try until he’s ready.” I was in no rush. My kid doesn’t have to do things first. But he always said no, except for a few random times. So, what does “ready” really mean? Maybe, I thought, while he may not be “interested,” he’s actually “ready.”

As the warm-weather long weekend approached, I decided to do potty training weekend boot camp. I didn’t read any books. My friend V googled a few pointers to me over the phone. My idea was: pants-off weekend, roll up the carpets, get some yummy drinks, and post a sticker chart. One sticker per something in the potty, and one lollipop every ten stickers. A  huge pile of enticing handed-down undies with sharks, trucks, airplanes, and dinosaurs in Santa hats. What could go wrong?

The first three days were almost perfect. This is where parenting will take your hand and lead you down a beautiful path and you actually think to yourself things like, “Other parents must be doing this wrong!” E happily  went to the potty with me every 20-30 minutes, peed or pooped almost every time with a proud twinkle in his eye, and celebrated his sticker win, happily pulling up his pants, washing hands, and going back to playing. We played T-ball in the backyard (pants on), I cooked a lot, I set an alarm with Alexa for every 20 minutes, and he did his business. He had a few accidents, which seemed good too, for additional reinforcement. He even wore undies overnight and stayed dry! We facetimed family members to share the good news and solicit more cheering. As I packed a bag of extra clothes and undies for school on Monday night, I basically felt like we were done.

Some friends asked on Facebook how it was going and I gave smug answers that now I need to go back and amend.

He went to school on Tuesday and I chatted with the teachers, who all oohed and aahed over E’s progress and congratulated him on his undies.

When I picked him up at the end of the day, the first thing I noticed was that he was wearing the same clothes I dropped him off in. Could it be that he had no accidents???

Yes! But he also didn’t go ALL DAY until ten minutes before I got there. See? A curveball I didn’t know was possible. They said they took him to the potty many times, but he cried and refused. Only now did I realize that it was a regular big toilet only, which must be a massive transition from the little plastic potty with your mom and the sticker chart at home.

We got home and he spent the evening dancing around not wanting to use the potty at home either. Total 180. He wanted nothing to do with it- it became the typical power struggle we have about everything with toddlers: eating, sleeping, getting dressed, brushing teeth, getting in the car… A lot of “NO!” and the more I pushed it, the more adamant he became. If I offered prizes, he just got so frustrated because he knew in his heart there was no way he would ever sit on the potty again. He went only the tiniest bit out of desperation and also had an accident. In the middle of the night, I was googling the dangers of holding it too long and feeling my anxiety thermometer rise.

On the second day, the teacher texted me that he went pee three times in the morning. I’m not kidding when I tell you that I felt euphoria over this, like I was on drugs. Mom brains are wired for this stuff. But he didn’t go all afternoon. And then he didn’t go all evening. And then all night. In the morning, I was freaking out again.

In the middle of that night, I found a research paper written by a doctor who recommended stopping the suggesting/nudging/urging- this is what creates the power struggle. Just drop it. Don’t bring it up at all. Let the child know it’s his body and he can decide when he needs to go. That rang true to me. So I dropped it.

In the morning, he was so uncomfortable but resolute. I almost had to admire his dedication, even if it was making me crazy. He was still drinking and eating, had no other symptoms of anything wrong, but was struggling both physically and emotionally. You just can’t rationalize with a two-year-old. He may understand what’s happening but rational argument can’t touch it.

I called the nurseline, and the nurse had never heard of a child who could hold their pee for that long, talked about possible obstructions… I also read online that 95% of kids can’t hold their pee. Do I have a kid in the 5%? Should I be proud?

I decided that it was more important to make sure he could relieve himself than to try to be consistent… so I put him in a diaper. And he did #1 and #2. (Again, the euphoria but tempered with wondering if I just started us back at square one.) Then back to undies.

Yesterday at school was the same: peed only in the morning and not all afternoon. In the evening, we had swimming lessons, so I feel like it’s safe to assume he peed a lot, as all kids must do. (Pools for kid swimming lessons must be so saturated in pee but let’s not think about it.) At home, he had an accident. I’m hoping for accidents now. Who could have predicted?

Partway through writing this, I heard, “Mom?” coming from the bedroom. I set my laptop down and went to the bedroom door, opening it into the dark room. I saw this little shadow person standing at the foot of the bed drop to the floor, saying, “noooooo!” My brain cycled through the possibilities- is he wet? And then he said, “I WANTED TO DO IT!” Lately, in the morning, he’s been coming out the other door and then running through hall and dining room to reach me on the couch. I had messed up his morning tradition. This is such a good example of a two-year-old.

I sat back down on the couch, awaiting his dramatic entrance. He came out the other way (the bedroom has two doors) and ran out with a mad expression on his face. He leaped into my arms. He was dry. I asked if he needed the potty and he said no. He requested fire truck videos and I said yes.

I officially don’t know what I’m doing now. But we’ll keep doing it! 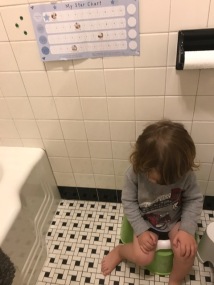 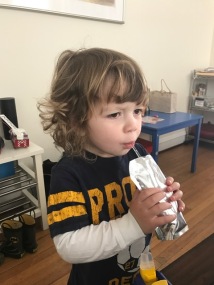 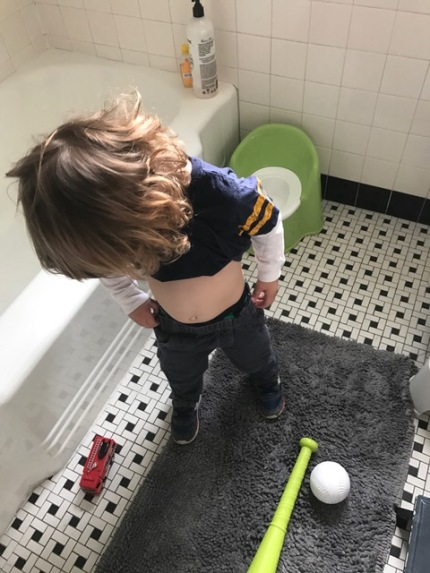 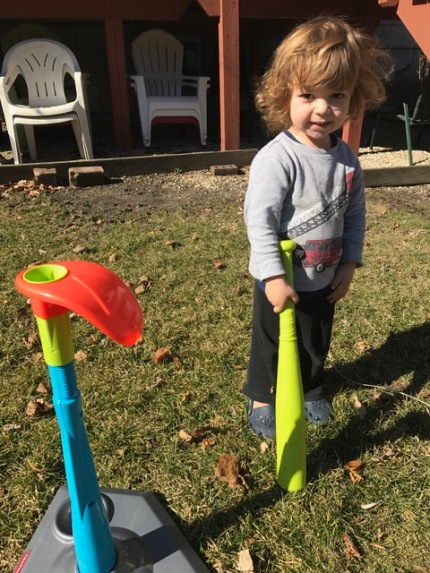