I’m on the iPad tonight and feeling sleepy… But before bed, i wanted to share this lil parcel which arrived in the mail for me today: 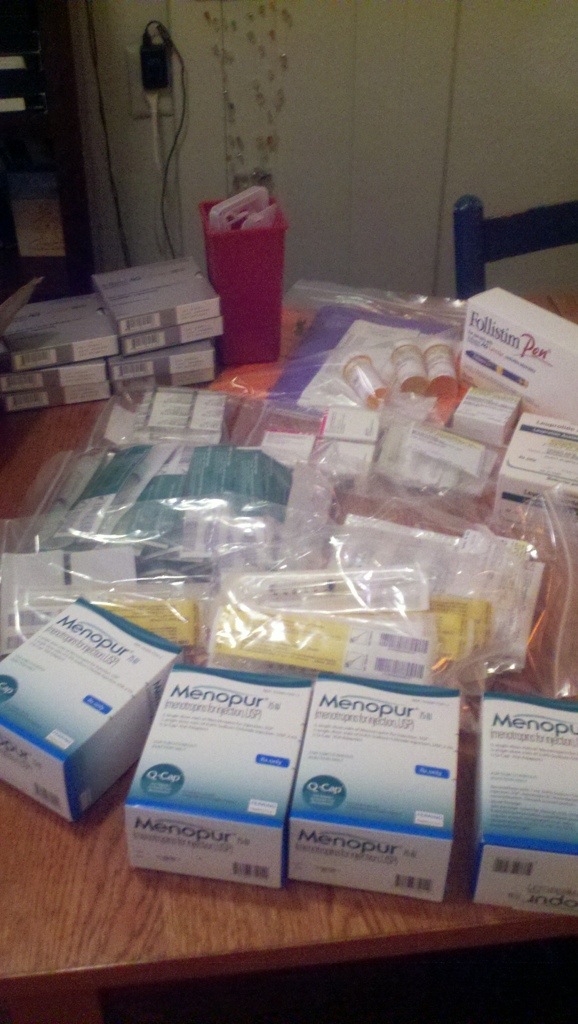 After my last post, my IVF veteran friends called one by one, sharing their experiences. I realized I was still swimming in uncertainty about Day 3 vs. Day 5 and genetic testing. Then I talked to Dr. B, my friend who is pregnant after 2 IVFs–first time she did a Day 3 transfer and it didn’t work. Second time: genetic testing and a frozen embryo transfer a month later–worked. She also reminded me of a woman we know from the national boards who, like me, got pregnant easily and had early losses. She got tons of eggs, and 6 embryos made it to Day 5. After testing, they found that only one was normal. And that’s the one she’s pregnant with now! They can’t eyeball these things… And at my age, 2/3 of my eggs aren’t going to work.

I realized that putting 3-4 embies in on Day 3 would feel like “spray and pray.” And why not find out which ones have the right chromosome count when the technology is there? And mitigate the risk of miscarriage? They only want to put back one to ensure that this blog doesn’t turn into solo mama with twins (as if I could keep blogging!). The risks are: losing a normal one between Days 3 and 5 (impossible to know if this happens or not), ending up with all abnormal, or ending up with nothing.

I sat with it, did a pro/con list. I have to say, the pro/con list never fails me when it comes to big decisions. What rose to the top as the favorite pro? Peace of mind.

Today I met with the genetic counselor along with a doctor who was observing. We were all women around the same age. I learned so much nerdy science stuff that I can’t adequately convey while typing on the iPad. Let’s just say that the technology is mind blowing. Particularly the part where they map the genetics of me and McPiercy and it’s where the code veers from either of ours that they determine it’s abnormal. That and missing or extra chromosomes.

They felt I was a strong candidate for PGS given my age and my high ovarian reserve. So, I’m going for the method that has the highest rate of success. Why not knock this out in one round? My favorite stat: they predict I have a 93% chance of getting at least one normal embryo. (and, if it works, there is a 100% chance it was the right one.)

I emailed Dr. T because he gave me his card and said I could. I apologized for changing my mind but apparently needed more time and now I’m clear. All he had done was “order the labs” so I think all he had to do was revise the order. He wrote back, “No Problem, K” and I liked how he capitalized No Problem. He acknowledged that it’s a very difficult decision and copied in Olga and Lili (the genetic counselor), so now we’re all on the same page.

So, sports fans, I just added a month to the final result. The biopsies, a few cells from the part of each embie that will become the placenta gets couriered down to San Carlos where the results take two weeks. So I’ll catch the next cycle and transfer in early May. After a little R&R and detox from all those drugs you see on my dining room table. My baby will be born in 2014.

Good night, friends. I leave you with this light fixture in the restaurant where I had dinner tonight with my friend C. Am I hallucinating or do you see it too?

8 thoughts on “peace of mind”